Amsterdam: "At night, the city centre is an urban jungle according to the Ombudsman" 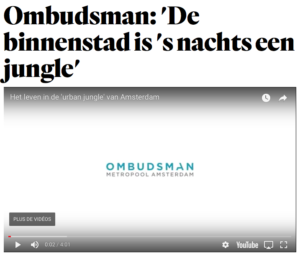 The Het Parool site published an article on 3 March 2108 : "Ombudsman: De binnenstad is 's nachts een jungle" (At night, the city centre is an urban jungle according to the Ombudsman). The city's Ombudsman, M. Zuurmond spent a night with residents who live in the city centre, in one of the three most vibrant quarters of Amsterdam at night.
He carried out the same experiment last year and the following day he blew the whistle, notably saying he had had the impression "the Olympic stadium was spilling out onto the streets of the area". The Mayor of Amsterdam then decided to deploy 140 extra policemen.
This time the ombudsman counted all the offences he witnessed while looking out of the window: 942! In particular: urinating, defecating, sexual intercourse in the street, driving in the wrong direction up a one-way street, etc. He counted 810 taxis taking the tiny street ("official" taxis and Uber taxis which are too numerous in the city). He heard 155 cars hooting and recorded a 65dB sound level inside the bedroom. The police patrolled the area but did nothing. "Chaos, an urban jungle" according to the Ombudsman. He added: "If Amsterdam were a theme park it would have been closed a long time ago!".

The video is eloquent and does not require any knowledge of Dutch. Recorded scenes and charts speak for themselves.